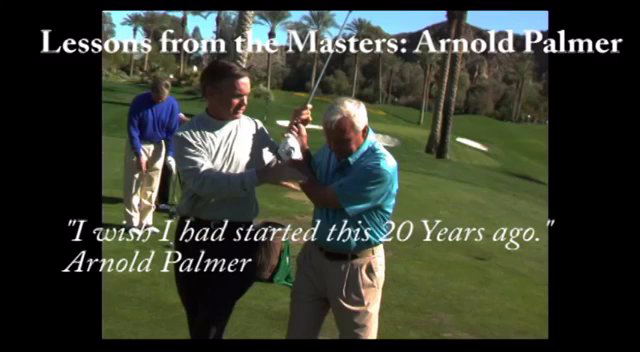 After playing a practice round with Tommy Jacobs several years ago at the Senior PGA Championship, Arnold Palmer was amazed at Tommy’s incredible driving distance – especially considering that nearly all of the other seniors had ‘lost’ distance!

Tommy told him that he had embarked on Roger Fredericks’ Flexibility program- which included specific golf stretching and flexibility protocols and that he had actually GAINED a substantial amount of driving distance even ‘after’ becoming a senior!

Eventually Arnold Palmer and Roger got together and as they say, the rest is history. After producing a very successful Infomercial together, “Roger Fredericks Reveals the Secrets to Golf Swing Flexibility”, Roger has written his latest book ‘The Flexible Golf Swing’ where he reveals the Secrets to the Golf Swing and Flexibility – just as he has to over 200,000 golfers including 70 Tour professionals, including 7 Hall of Famers; and where Arnold Palmer has written the Foreward.

Arnold Palmer has used Roger Fredericks’ stretching and flexibility program for years On and Off the Course.