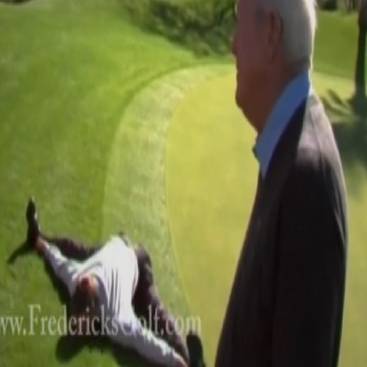 One of the highlights of my golf career was the time I spent with Arnold Palmer. Not only was I blessed to have worked with him for several years, but I thoroughly enjoyed developing a relationship with him that I would describe as ‘Priceless’. I’ve never seen a celebrity – let alone the stature that he had- that treated people so well. He not only enjoyed people, but he actually went out of his way to accommodate them.

He not only learned the importance of maintaining one’s flexibility, but helped me tremendously promote it!

This short video clip is some outtakes of us behind the scenes when we were filming my infomercial….Roger Fredericks Reveals The SECRETS to GOLF SWING FLEXIBILITY. I had forgotten I had some of this footage until I came across it recently, and it brought back some great memories. I hope you’ll enjoy it too!

Although Mr. Palmer isn’t with us anymore, he will certainly never be forgotten by me.