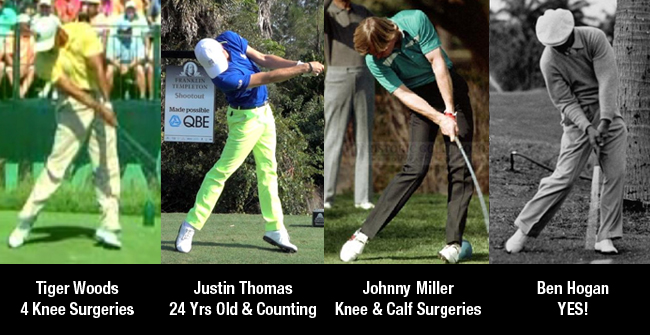 By now, you’ve probably seen a lot of golfers – including Tour Players, land on the outside of their left feet when they move down into the ball.  The question is…

The answer to that question is…

In fact, it’s usually just a matter of time before some part of the linkage of muscles on the left side of the body will finally wear down and injuries will ‘pop up’. i.e. you can bet that there’s going to be an accident down the road somewhere on the left side involving either the left shoulder, left knee, left ankle, the Achilles tendon, etc.

THE QUESTION IS WHY DO MANY GOLFERS LAND THAT WAY?

Although there’s not one direct answer, the reality is that in the majority of cases, golfers have too strong and dominant right hips ‘and right sides’ that over power the weaker and less stable left sides. Then when they move powerfully into the front foot, the left side often doesn’t hold up and the foot, knee, ankle, etc., will eventually give out.  Eventually the repetitive friction that’s placed on the muscles of the left side eventually wear the joint down – just like the wheel of a car that’s out of alignment will finally wear the rubber out.

To elaborate further, it’s best to ‘LAND FLAT ON THE LEFT FOOT’ rather than come down on the OUTSIDE of it.

The answer is to:
a).  Keep the muscles on ‘Both Sides of the body Balanced, and
b). Do some Bi lateral exercises – like making left handed golf swings to keep the muscles balanced.

(In an upcoming newsletter, I’m going to show you an exercise that will help you attain balance and stabilize that left side).

But for now, try doing the easy to do exercises on the Slant Board, – which will go a long way to keep your body Balanced!