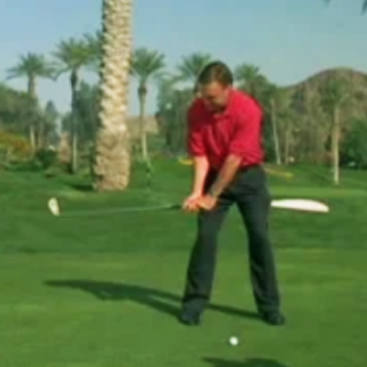 What is the best amount of Golf Backswing?

In my experience, a very high percentage of amateurs have ‘Too Many’ Moving Parts going on in their golf backswings, and Over Swinging is certainly one of those excessive moving parts.

1) Because they’re trying to hit the ball too far, and

2) Their lack of flexibility forces them to make compensations throughout their swings.

The truth is however, that a person doesn’t necessarily have to have a long swing to hit the ball far. One such example is Tony Finau who is a Monster Hitter, and who takes it back unusually short – especially for a tall man. Although he takes it back short with his arms, the truth is that he makes a powerful shoulder coil against the resistance of his lower body. This creates a strong X-Factor as my friend Jim McClean calls it I.e. the differential between a person’s shoulders and hips, and results in more power.

One of my friends was the late Dick Mayer who was one of the great players in the 1950’s and also the 1957 U.S. Open Champion and Player of the year. Dick told me that he used to practice quite a bit with the legendary Ben Hogan down in Texas, and often times Hogan would practice with the drill that I’m showing in today’s video. When asked why he did this drill, Hogan replied that “he wanted to eliminate any excessive motion in his backswing which then would also allow him to move more freely through the ball.

I’ve been using this drill and teaching it for years, and one thing my students are all amazed at is how far they can hit it without any excessive movements or strain. In honor of Dick, I named this drill – ‘The Dick Mayer Drill’.

Give this drill a try, and let me know what you think.