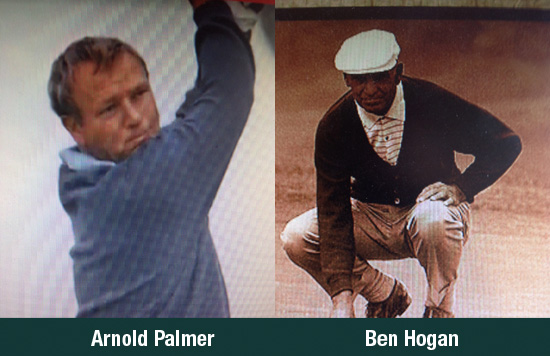 Over decades, I’ve been incredibly blessed to have known many of the most successful people in the world  – and in many cases, of all time. This includes Hall of Fame athletes from virtually every sport, business icons, amazingly successful artists, and very talented lay people.

As Ben Hogan walked to the practice tee before a round, a reporter began to ask him a question. Hogan put up his hand and said,
“Not now, I’ve already started my round.”

Over decades, I’ve been incredibly blessed to have known many of the most successful people in the world  – and in many cases, of all time. This includes Hall of Fame athletes from virtually every sport, business icons, amazingly successful artists, and very talented lay people.

One thing I’ve noticed is that they ALL have an incredible ability to focus on their chosen vocation, career, or pastime, and especially they all BELIEVE that there’s NOTHING they can’t accomplish (i.e., they let NOTHING get in the way of stopping them from achieving their goals!). However, there are many areas of their lives where they’re not very good and are actually terrible in their ability to do certain things. I’ve come to believe that the difference between what they do well – and what they do poorly – is simply PASSION!

As an example, I’ll never forget the first time I spent considerable time with Arnold Palmer at Bay Hill in 2004.  At the end of the 3rd day, I was reviewing the fitness programs I had put together for him and said (like I always do) that I’d like him to do some goal setting.  He said , “what kind of goals?”  I said, “how about we set two goals:  The first being that you make the cut in the U.S. Senior Open, and the second that you win the most skins in the next Senior Skins Game on TV”.  He looked at me and said, “Why are you setting the goals so low?”  I replied, “Well, I want to be realistic and don’t want to set a goal like winning the Masters!”  At that point, he walked right up to me – eye to eye – poked a finger in my chest, and with those beady brown eyes of his said, “Rog, I sincerely believe that if I can get another 50 yards on my tee shots, that I can compete at Augusta!”  AT THE TIME HE HAD JUST TURNED 74 YEARS OLD!, and I can tell you with certainty, he was dead serious!!  My reaction was ‘Wow’ he really believes that –  THAT’S  why he’s so successful!

Since then, I’ve paid more attention to how other successful people look at things – and, it’s irrefutable to me  that the difference  is in ATTITUDE!  ALL successful people have a passion and a belief for what they do!

My advice is; that when you go out to play golf, set a goal on EVERY shot.  Where do I want this ball to go?  What type of shot do I want to hit?  What’s the smart play?  Ad infinitum.  In other words, set goals – be passionate – and don’t let ANYTHING STOP YOU!!

More free articles from Roger can be found at www.fredericksgolf.com.

In my Video Library at www.fredericksgolf.com I also have many other drills
that will help you master golf’s TRUE FUNDAMENTALS!