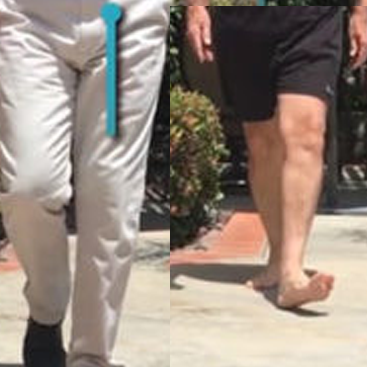 THIS CAR HAS A DAMAGED WHEEL AND TIRE
WOULD ‘JUST ‘FIXING THE WHEEL GET THE CAR BACK ‘IN SHAPE’?

Back in my early twenties, I had a professional golf career cut short due to TWO Knee surgeries and TWO  MAJOR wrist surgeries; after which my golf swing was never quite the same.  My story is not unique because for decades, I’ve had people come to me who’ve had multiple surgeries throughout their bodies and limbs – many of them for the SAME injury; and a high percentage of them are still dysfunctional. (On that note, I think the record for the most surgeries I’ve seen was 19 from a guy who came to me last year).  Again, It’s not uncommon for me to see people who’ve had multiple surgeries, and as they’ve gotten older, are in worse shape, often times not being able to play golf anymore.

HEY, WAIT A MINUTE, ISN’T THE REASON THAT PEOPLE HAVE SURGERIES TO BEGIN WITH IS TO ‘FIX’ THE PROBLEM?

Then, why do so many surgeries not ‘Fix’ the problem?  In fact, the last statistics that I’ve heard is that around 30% of Back Surgeries are Re-Do’s.

In My Opinion & Experience, I believe that despite the incredible new procedures in medicine, that the majority of surgeries address the ‘SITE OF THE PAIN’ (and injury) and not the ‘SOURCE OF IT’.

The fact of the matter is; that if a person’s body is out of proper alignment, there will be friction and load bear pressure applied elsewhere (just like when the misalignment of the chassis of the car blew out the wheel).  When the joints of the body line up, friction is then taken off of the joints which will usually prevent and eliminate the pain.  This is called JOINT CENTRATION.

Getting your body back into the design that Nature’s gave us will certainly help rehab and restore your body – and get you back on the golf course!

This is why I created THE POSTURE SYSTEM VIDEO SERIES – where you can find out what Posture Type you are; and more importantly, WHAT TO DO ABOUT IT!

Get The Posture System